TUBB, also known as TUBB5, is a beta-tubulin gene that is highly active in neuron-producing cells (or progenitors). TUBB5 mutations have been shown to affect the numbers of neurons produced during brain development. Reflecting this, TUBB5 variants are commonly associated with a profound reduction in brain size/volume (microcephaly).

Currently, less than 10 different variants have been described in TUBB5. Sometimes microcephaly can be accompanied by brain surface abnormalities (e.g. polymicrogyria). Some children with TUBB5 variants also have characteristic folding of excess skin after birth (known as Circumferential Skin Creases Kunze Type), indicating this tubulin is also involved in skin development. 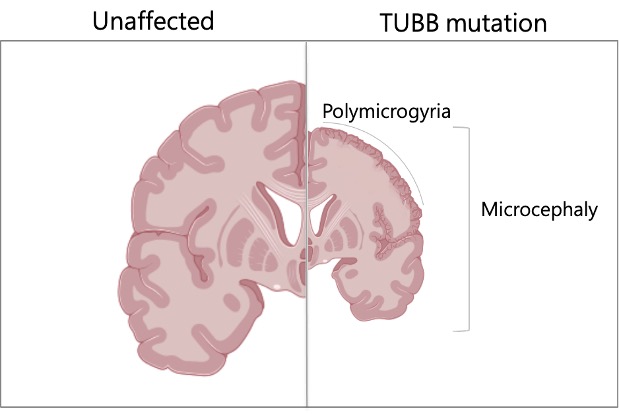 Mutations in TUBB5 are most commonly associated with microcephaly (i.e., reduction in the total brain volume/size). In some individuals, this is accompanied by polymicrogyria-like brain malformations. Polymicrogyria is a term to describe an increased number of abnormally-small folds on the surface of the brain.