TUBA1A is an alpha-tubulin gene. It is extremely important to proper brain development, encoding for one of the most abundant proteins in the embryonic brain. TUBA1A was the first Tubulinopathy gene to be described when it was identified in children with lissencephaly in 2007 (Keays et al., 2007). Since then, over 85 different mutations have been reported.

As TUBA1A is so abundant to the developing brain, mutations affecting this gene are often associated with profound brain malformations and developmental delay. Mutations in TUBA1A are commonly associated with lissencephaly (see image, right) with a reduction in cerebellar volume, but mutations have also been linked to a range other cortical malformations such as polymicrogyria, microcephaly and hydranencephaly.

TUBA1A is highly expressed in new-born neurons, with evidence suggesting that TUBA1A variants impair the ability of these neurons to migrate from their place of birth towards the developing cerebral cortex. This results in the mispositioning of neurons and a thick and disorganised cerebral cortex, lacking the characteristic folds.
A small number of TUBA1A variants have been identified in individuals with cerebral palsy (McMichael et al., 2015; Jin et al., 2020). 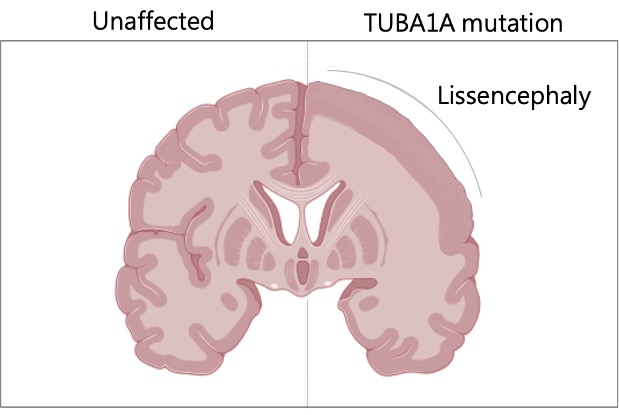 Lissencephaly is a common feature of TUBA1A variants. Literally meaning ‘smooth-brain’, lissencephaly is characterised by a smooth or broadly folded brain surface.