TUBB2A is a beta-tubulin gene that is active in the brain during both its development and after birth.

Since the original report, 15 variants have been described and TUBB2A is now associated with a range of brain malformations ranging from simplification of brain surface folding to more profound brain patterning malformations, with or without a reduction in brain size (Brock et al., 2021).

Autism is emerging as a common feature of individuals with TUBB2A mutations (Schmidt et al., 2021).

As with many of the tubulinopathies, there are some variants which are identified in multiple individuals. By far the most common variant in TUBB2A is the c.743C>T (p.A248V).

One individual carrying a TUBB2A p.D417N variant has been described with a neurodegeneration-like disorder (Sferra et al., 2018), potentially highlighting the continued activity of TUBB2A in neurons beyond brain development. 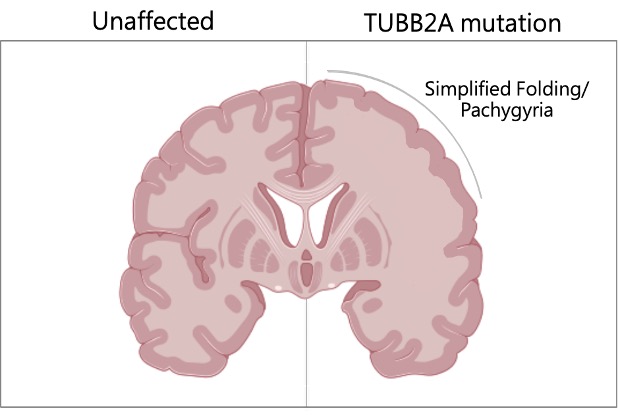 TUBB2A variants are often associated with a simplification of the cortical folds found at the brain surface. In some instances and for some mutations, individuals carrying TUBB2A variants do not have any detectable brain folding abnormalities on MRI.